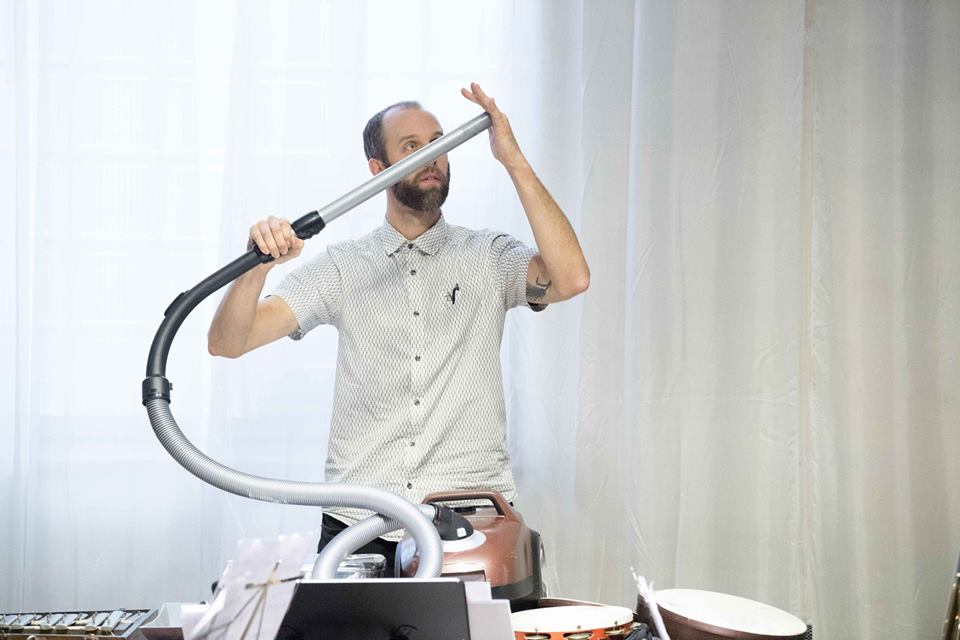 Posted by owenHweaver at 3:19 AM No comments:

Claremont, the fifth and final movement of Memory Palace by Christopher Cerrone.
Performed on the Audioglimt music and film series at Wrap in Bergen, featuring Halibut Cove, a film by Katherine Brennan.
Posted by owenHweaver at 2:55 AM No comments:

Posted by owenHweaver at 11:47 PM No comments:

Same Face! by Florent Ghys is a five movement work for drums, glockenspiel, electronics and video. The piece was created at Avaloch Farm and Princeton University and premiered on Princeton's Sound Kitchen series in 2016.

Posted by owenHweaver at 10:52 AM No comments:

The Third Ascension by Glenn Branca

This week I'm in LA for a recital on the Outpost Concert Series Wednesday, 8pm at University of California Riverside and a visit to the CalArts percussion department. Sprawl, smog, tacos. I am seriously feeling the California Love.

Composer Christopher Cerrone made a big impression on the Los Angeles area with last fall's performances of his Pulitzer Prize nomination-nabbing creation Invisible Cities. What, you don't know about Invisible Cities? The large scale opera performed in LA's Union Station? The one where the audience wore headphones that piped in the orchestral score while the singers and dancers took over the terminal like some kind of glorious, high art flash mob? Yes, that Invisible Cities. I'd go into greater detail but instead you should just watch the opera's official trailer:

Wow, right? And guess what, Invisible Cities is now an album you can own! (If we can't plug our friends' astonishing projects what do we have left in this world?) As you might imagine, audiences and critics gave due praise to the whole thing.

On the heels of Chris's SoCal exploits I'm particularly excited to bring more of his sublime music to the area in the form of Memory Palace for solo percussion and electronics, a piece I commissioned in 2012. I've gone on about it here before but I will say that it's always a treat to share it with audiences as we explore the thick-and-thin marriage of music and memory together.

Here's a teaser from a live performance at Le Poisson Rouge:

I'm also thrilled to play a piece I co-commissioned in 2011 from Ian Dicke while we were classmates (and bandmates) at the University of Texas. Eight oh Eight is a joyride back in time to when the now revered 808 drum machine was king. I guess it's still king, and may the sun never set on its rule. With a microphone, a modest battery of percussion instruments, and Ian's exceedingly deft MaxMSP software patch I'll build and deconstruct loop upon loop of next-level beats and scrambled sounds. Through it all the iconic sounds of the 808 prevail, although often twisted, layered, and stretched. "Drum machines have no soul," the bumper sticker reads. It behooves me to agree, but they sure do sound cool.

Speaking of the 80's, I will also play a solo for maracas! And the triangle! "Wait, that's a thing?" you ask. Yes. It's a thing. A wonderful thing.

Temazcal (1984) for solo maracas and electronics by Javier Alvarez is an old friend of mine. A frenetic, obsessive, dark-yet-folkloric friend. My handmade Venezuelan Joropo maracas and I have been through a lot the last five years but they've never let me down, despite the fact that I routinely throttle them in public.

Silver Streetcar for the Orchestra (1988) by Alvin Lucier will show you an expanse of sound contained within a metal rod, bent twice. The triangle occupies a low rung on the ladder of musical instruments but because of this underdog status, its strong geometric shape, and my comprehension of its true sonic power it has become one of my very favorites.

In addition to my recital on the Outpost Series I'm paying a visit to the CalArts percussion studio on Tuesday at 2pm to perform Temazcal and Memory Palace and discuss music, life, and all things elctroacoustic performance practices. CalArts is a storied place, a bastion of musical experimentation, technology, and forward thinking. The opportunity to do a show-and-tell there is a dream for me and I can't wait to meet everyone and snoop around.
Posted by owenHweaver at 9:56 PM No comments:

If you've listened to any rock n roll music in the last four decades odds are you're at least passing familiar with Gimme Shelter by the Rolling Stones. Written in 1969, the song simmers with a sense of unrest, capturing the turbulent times. It's dark. It's foreboding. It's really good. And according to many, including Rolling Stone magazine, it's the band's best song:

"That's a kind of end-of-the-world song, really. It's apocalypse; the whole record's like that," Jagger told Rolling Stone in 1995, describing "Gimme Shelter." Like nothing else in rock & roll, the song embodies the physical experience of living through a tumultuous historical moment. It's the Stones' perfect storm: the ultimate Sixties eulogy and rock's greatest bad-trip anthem, with the gathering power of soul music and a chaotic drive to beat any punk rock. [Owen's note: not so sure about the punk rock thing, RS]

And wouldn't you know, it's also the inspiration behind a brand new work by composer Ravi Kittappa. Ravi and I have been good friends since we hit it off at the 2010 Bang on a Can Summer Festival and it didn't take me long to learn that he is a walking encyclopedia of rock history, with emphasis on the British Invasion. Even British bands that didn't so much invade. So it's no surprise that despite training at Columbia University with notable spectralist composer Tristan Murail and his penchant for infusing compositions with Indian Carnatic elements (be it via droning sruti boxes or electronic samples) that this is the second piece of his I've played that is a ripping good deconstruction of a song by a powerhouse British rock band. (The first was a crazed solo percussion/voice meltdown of War Pigs by Black Sabbath that requires its own due here one of these days...)

For his new piece Shelter, Ravi has created an open-ended composition--the target ballpark for the premiere is 15-20 minutes--from the first 42 seconds of the song. That's just the intro! Go ahead, give it a listen at this Youtube vid chock-full of appropriately 1960's iconography.


By the time Charlie Watts kicks in the drums we're Done Dundee, and that's what makes this piece work so well. Ever heard of doing more with less? Without giving too much away, Shelter is an ingeniously simple construction that interminably stretches the notes and rhythms laid down by the 'Stones with an improvisatory flair that allows the musicians to breathe and shape the time, gradually gaining steam all the while. And in this case, the musicians are the combined ensembles of interstellar Brooklyn percussion trio TIGUE and my beloved trio Concert Black. Although I'm sorely biased, it's an absolutely ideal assemblage of players for this project, given everyone's range of talents in executing notated music, writing it themselves, and improvising [read: jamming, man]. Sweet band, Ravi! Har.

And you can hear us give it a spin this very weekend! The world premiere is happening on Saturday, 9/27 at the Dimenna Center for Classical Music alongside two incredible pieces by Robert Honstein. Plus it's the season opener for Permutations NYC. In fact, it's the start of a beautiful new special friendship between TIGUE and Concert Black that will see coast to coast performances of Shelter and a split album of Honstein jams. As always, further bulletins as events warrant.

In the meantime, keep this close to your heart: